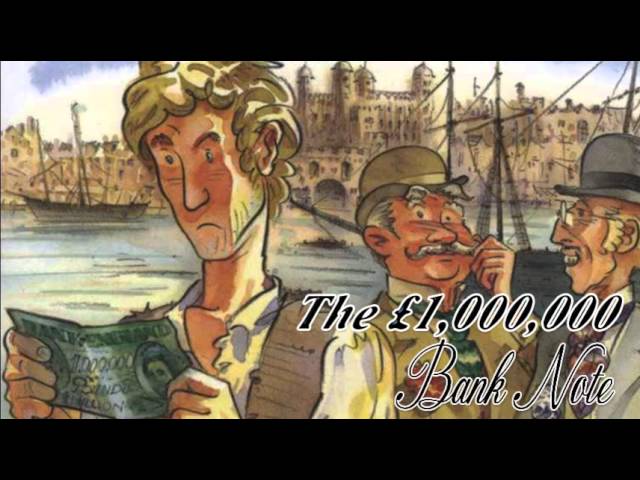 When I was 27 years old I worked as a clerk in a company in San Francisco. I liked my job, because it was easy. I was sure I was the best worker.

On Saturdays I used to sail a boat in my free time. One day I sailed too far and I was lost in the sea. A small ship saved me. It was going to London. I didn’t have money for a ticket so I worked as a sailor there. When I got to London I was very hungry. When I was trying to find something to eat, I heard some noise behind me. The window opened and a gentleman shouted to me, “come in here, please.”

A servant opened the door and I went to the room where two old gentlemen were sitting. I sat on the chair and saw some food on the table, but nobody gave me anything.

These two gentlemen made a bet.

You know that the Bank of England made two notes of a million pounds each. The Bank used only one of them, when the other one was still in there. It was interesting for the old gentlemen to see a stranger with that million-pound banknote in London with no friends and no family. The first man thought about a bad ending for a stranger. The second one believed in a good ending. They bought this very banknote and waited for a suitable person.

They needed a smart, honest and poor man. It wasn’t easy to find a suitable man. Finally, they met me and I was perfect. I answered all their questions. After that, they gave me an envelope. I didn’t want to take part in it, but I didn’t have any choice.

I opened the envelope later. I found money there and it was real. After that I went to a cheap restaurant to eat. When I was full I looked at the banknote. Five million dollars. I was shocked.

Then I saw the owner who was looking at the banknote. I didn’t know what to do, but then I gave him the banknote and asked him to change it. He said to me that he was really sorry, but he couldn’t do that.

“I am afraid I have nothing but this banknote. I’m asking you to change it,” I said.

The owner said it was fine and I could pay later. He also said that I could eat what I wanted in this restaurant. I went to those gentlemen to tell them everything. When I came there I said I wanted to see the old men.

“They aren’t home,” said the servant.

“When will they be back?”

“In a month,” the servant answered.

I took the letter. It said the following:

“You are a smart and honest man. We think you are poor and a stranger in London. You have got some money here. It’s all yours for 30 days. Don’t waste it. Come back to this house in a month. I have bet on you. If I win I will give you any job you want”.

No signature. No address. No date.

I felt happy dreaming about my new job. I wanted to make a lot of money. I wanted to change my rags. I knew I couldn’t use my banknote, but I entered a tailors’ workshop and asked if they had any suits.

One of the workers gave me a suit which wasn’t so good and it didn’t fit me well, but it was new. I liked it.

“Can I ask you to wait for a few days. I have got money, but don’t think you can change it,” I asked.

“I’m not surprised. Gentlemen like you always say that,” he answered.

“I can pay for this suit. I think that it will be difficult for you to change my note,” I explained.

“I didn’t mean to upset you, sir. We can change any note you’ll give to us,” the man said.

“Sorry, then here you are.” I gave him my banknote.

I saw a smile on his face when he took my note. After he looked at it his face changed. Then the owner came up to us.

“I’m waiting for my change,” I answered.

“Tod, give him the change,” the owner said.

“Give him the change? Look at this banknote yourself,” Tod said.

The owner got very angry.

“He gave a millionaire such a suit. Tod is silly. He doesn’t see that a rich person wants to buy a good suit,” the owner said. “Here you go, sir! Put on this suit. I’m sure this is what you want. It looks great!”

I was very happy in that new suit.

“Are you ready to wait a while? I should change the banknote”, I explained.

“For some time? Oh, we can wait forever, sir,” the man said and smiled.

I started buying many things and asking to change the note. A week later I looked great. I lived in a very expensive hotel. I had lunch there, but for breakfast I went to that cheap restaurant, which became very popular thanks to me. The owner of the place, Harris, was so thankful to me that he gave me a lot of money.

I became famous very fast. You could read about me in every newspaper. I was called a “Fat Cat”. I liked pretending to be poor when going to shops. People didn’t want to sell anything to me, but then I showed my banknote and it shocked them.

One day the American ambassador invited me for dinner and I agreed. My father and the ambassador were friends. It was a pleasure for me to be his guest.

The dinner was lovely, because I met one young lady, named Portia Langham. She looked beautiful. I fell in love with her so fast. I knew she was in love with me, too. We were looking at each other when the servant said, “Mr. Lloyd Hastings.”

The new guest saw me. He was coming up to me, but then he stopped.

“Of course you know me,” I smiled.

“You are…the…” The guest was really shocked.

“What a surprise! I never thought that it was you, Henry Adams. I remember a year ago you were a clerk working for Blake Hopkins in ‘Frisco. Now you are in London, a famous millionaire. It’s fantastic,” Mr. Lloyd Hastings said.

“How did it happen?” He asked.

“It’s a long story. I’ll tell you everything later,” I promised.

“I can’t. Wait, please. Tell me about yourself?” I asked.

He got really upset.

“Do you want to go to my place and tell me there?” I asked.

“Really?” He was so excited.

“That sounds great!” He said.

Miss Langham and I had a wonderful time. I told her I loved her. Miss Langham was laughing to tears while I was telling her everything. My story wasn’t funny at all, but I was ready to marry this lady.

“Dear Portia, would you like to go with me to those old gentlemen in two weeks?” I asked.

“I’d be happy to help you,” she replied.

When Hastings was telling me something I heard nothing because I was excited.

“Dear me, this is a palace!” He said, when we entered my study. “Now I feel like you are rich and I’m poor. I’m just hopeless,” he added.

“Have you got anything to drink?” Mr. Lloyd asked.

“Again? I told you everything.” He said.

I had to admit that I didn’t hear anything.

“I met the most wonderful girl in the world!” I said.

Mr. Lloyd was happy for me. He was too kind and patient, so he told me the story again. In short; he came to London with a great plan. He wanted to sell some mines and get some money. He worked really hard, but his plan didn’t work and he was broke.

“Give me a million, please.”

I wanted to tell him that I was poor, but later I had a better idea.

“I will help you, Lloyd.” I said. “Here’s what we will do. You will sell your mine in two weeks for three million dollars in cash. You will use my name. After that we’ll share the money,” I finished.

“I can use your name! I will never forget you!” He replied.

Soon people started asking me questions about the mines and Mr. Lloyd.

“Yes, I know the man and you can trust him,” I answered everyone.

At the end of the month I had two hundred thousand pounds in the London and Country Bank and Hastings got his money, too. I looked perfect when we went to the old gentlemen. Miss Langham was with me, as she promised. The same servant let us in and I could see those brothers. They were shocked when they saw me with Portia. I presented her as my future wife.

“Gentlemen, I’m ready to tell you everything.”

“We’ll be glad to hear it,” the gentlemen said. “If you have won the bet you can get any job you want. Have you got the million-pound note?”

I gave him the banknote.

“I can tell you everything if you let me. Now look at this,” I said.

“Henry, is it your money? You weren’t honest with me!” She said.

“Yes, my dear Portia, but I know you will forgive me,” I replied. “Now I think we should go.”

“Wait! I want to give you a job. Did you forget about that?” The gentleman asked.

“Henry, can I thank this gentleman, if you can’t?” Portia asked.

She came up to the gentleman and kissed him.

“Father, I’m as surprised as you are. He doesn’t want to take a job. He’s so rude.” Portia said.

“Sir, I’m sorry. I think I want to ask you about something,” I said.

“I want to marry your daughter,” I replied.

“I will be a good husband. You’ll see,” I promised her father.

“All right, then take her,” he answered.

We were so happy at that moment. At our wedding the million-pound banknote was given to us. I put it in a frame on the wall.

“As you can see, I got something much better than money.” 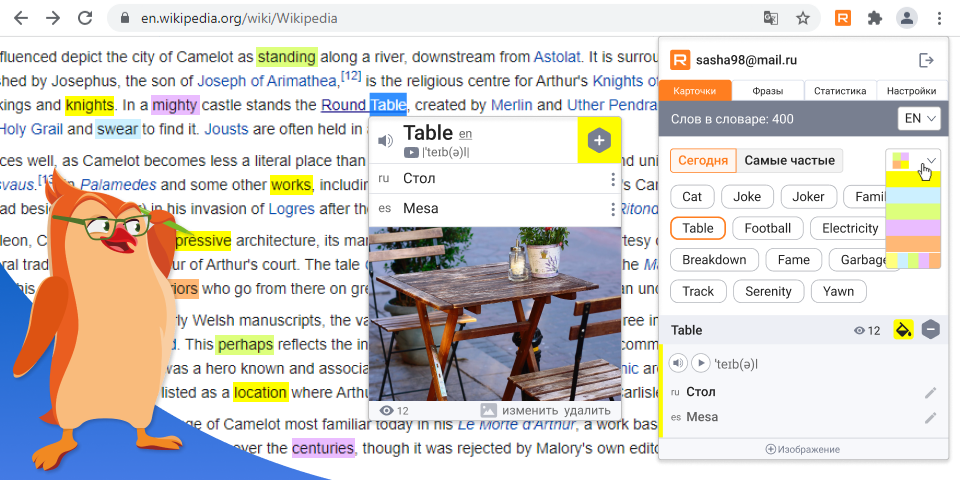